After over 5 months without any Munro bagging, I was itching to get out and explore some hills. Thankfully some decent weather and a bank holiday meant that my dad and I were able to take a trip to Crianlarich to climb two popular but very tough Munros – An Caisteal and Beinn a’Chroin – taking my total to 12.

Probably the only drawback with any sort of hill walking is the early start (admittedly, this is becoming less and less of a problem as I get “older”). We left Ayrshire at 0700 in order to give ourselves the full day to complete the near 9 mile journey over 2 Munros. With a stop off in Dumbarton for a subway breakfast and lunch for later, we arrived at the parking spot just off the A82 not long after 0830 due to very quiet roads and no harsh weather to slow us down.

Excited to bag the first new hills of the year, we donned our boots and packs and set off along a well constructed track underneath the West Highland railway line and away from the A82. We followed this track for just over a kilometre before turning off and aiming for the summit of Sron Garbh and the strangely named “Twistin hill”.

There was no path to speak of, but the dry weather we had experienced over the last couple of weeks meant the grass was not too wet and boggy, although I suspect after significant rainfall, the hillside may present less easier going than we experienced. The grassy slopes made for fairly easy going, gradually increasing and decreasing in steepness. As we were climbing along a northerly ridge, we were also still not quite in direct sunlight yet so managed to stay cool for the first ascent of the day. However, once we were on top of the ridge, the wind started to pick up dramatically and would stay that way until we were on the summit of Beinn a’Chroin later in the day. This made for very tough walking as we pushed our way against the wind towards the first summit of the day.

After around 45 minutes of walking, we soon reached the start of the ridge towards our first Munro of the day – An Caisteal. The views across to Beinn Chabhair and beyond were spectacular, but slightly hazy, meaning we were going to have a warm day ahead of us. The ridge from Sron Garbh climbs gently to An Caisteal and bypasses a couple of short rocky sections before making a final push to the summit, which we reached just after 1100, a little over 2 hours after setting off from the car.

We didn’t hang about long before setting off again as by this time the wind was now very strong (around 50mph I would guess), so we dropped down south towards the Bealach Bhuide hoping for some shelter to stop for some food and water. We descended quickly, but carefully, as the path twisted and turned around rocky slabs and steep grassy slopes. We soon made it to the Bealach Dubh half an hour after leaving the summit of An Caisteal and stopped for a well earned snack and drink of water.

Now out of the wind, the temperature was beginning to pick up and made the day feel very summery, instead of particularly cold on the exposed summit plateau. It was time to remove a couple of layers before we began the steep ascent onto Beinn a’Chroin and along the ridge to our second hill of the day.

The ascent was much steeper than the one onto An Caisteal earlier in the day, but with a few scrambly sections was also far more interesting. With only 400m or so to regain, we were soon on the wide, rocky ridge to the west of Beinn a’Chroin. We continued at a leisurely pace along the ridge, stopping often to admire the views east towards the Trossachs, south towards Ben Lomond and north towards Ben More and Stob Binnein. We reached the summit of Beinn a’Chroin – our second and final Munro of the day – just before 1245. 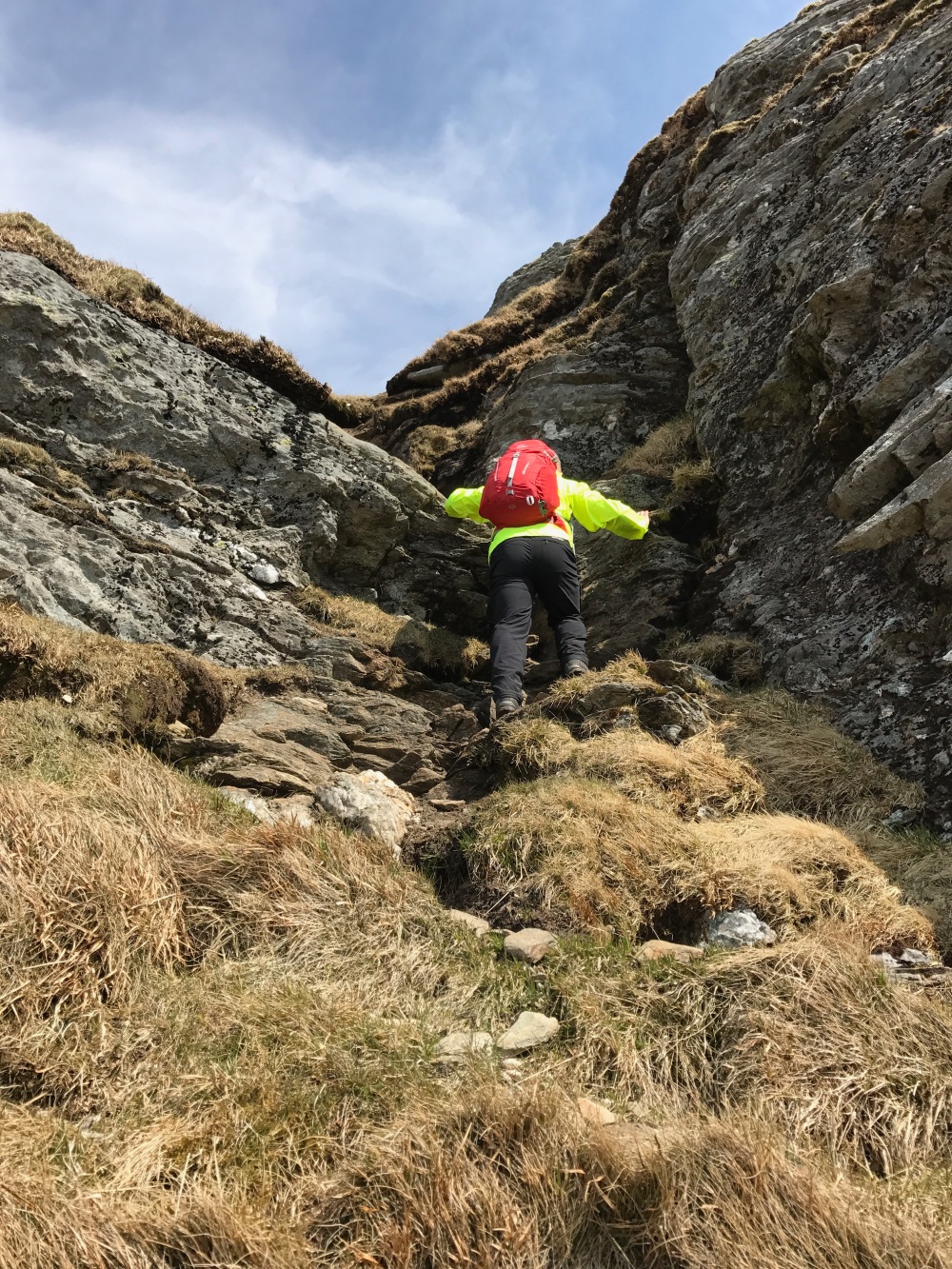 Pleased with the day’s progress, we stopped once more to take on some water and take some photos of the extensive and wild views surrounding us. It was really beginning to feel like summer now, with the green colour returning to the hillsides replacing the yellows and browns of dead grass and moss that had suffered over the winter. Ben Lui still had a considerable amount of snow on it’s north eastern side, reminding us that it wasn’t quite summer yet!

We pressed on and began our ascent into Coire Earb to reach the Falloch and follow this back to the car. The descent was easy going to begin with and we were able to follow a fairly decent path down the hillside. Stopping often to take in the awesome views, we trudged on to reach the valley floor and the river Falloch around 1400. We were both getting very tired now as this was the first hill walk of the year and although the long distance fitness of the West Highland Way trip would definitely have helped, we were both not used to this much ascent and descent, even with small packs. Still, we had nothing to complain about as we had been blessed with fantastic clear views along the whole journey and were now safely down in the valley floor with a flat(ish) – but still fairly long – walk out to the car.

We continued on towards the track over very swampy ground, which I again imagine would be quite treacherous and tricky in wetter conditions. We wound our way around bogs and wetter sections before reaching the main track just before 1500. From here it was much easier going back to the car. It was getting very hot and we were both glad to be back down off the hill and not far from the air conditioned car, so we picked up the pace once more and followed the track back past where we had turned off for An Caisteal earlier in the day and made it back to the car at around 1520, roughly 6.5 hours after setting off. For our first hill walking trip of the year we were pleased with this progress and dumped our packs, took our boots off and fell into the car after an exhausting, but fantastic day bagging 2 more Munros.